A man named Felix Pedro found gold here in 1902 and thousands of prospectors followed. Later, the construction of the Alaska Railroad, Alaska Highway, and Trans-Alaska Pipeline contributed to Fairbanks’ growth and importance. Today Fairbanks is the second largest city in Alaska and one of the most important transportation hubs. The “Golden Heart City”, as Fairbanks is also known, does indeed have a golden heart, because the nearby Fort Knox Gold Mine is Alaska’s largest gold mine. The now closed Gold Dredge No. 8, which has been designated a National Historic Site for its importance.

According to timedictionary, Fairbanks offers a myriad of activities year-round, whether you visit in the warm summer months when the sun rarely sets, or in the winter when you can see the spectacular Northern Lights in the night sky. In the winter, the city gears up for ice sculpting competitions and the famous Yukon Quest sled dog race, which stretches 1,000 miles to Whitehorse.

Paddle steamer trips on the Chena and Tanana Rivers are popular, as is visiting Pioneer Park, Alaska’s only historical theme park. The Morris Thomson Cultural & Visitor Center is the newest attraction. There are many exhibitions on culture and history here.

The University of Alaska Museum of the North also provides fascinating information on the geology and history of Alaska. Here you can see ‘Blue Babe’ – the mummy of a 36,000 year old bison that was well preserved in the permafrost.

The World Eskimo Indian Olympics are held in Fairbanks every July. Here, for four days, the descendants of the indigenous people demonstrate traditional disciplines that were once essential for survival.

The surrounding area is ideal for hiking, dog sledding, in winter and summer, or skiing in the White Mountains area. The Chena River State Recreation Area invites you to see moose or launch a canoe, kayak or inflatable boat and float down the Chena River to Fairbanks. Or you can enjoy relaxation in the hot springs at Chena Hot Springs, which has a remarkable ice museum, among other things.

Fairbanks is also ideally located for touring the Brooks Range, northern wilderness lodges and the settlements of Fort Yukon, Coldfoot, Bettles, Anaktuvuk Pass. The Arctic National Wildlife Refuge is easily accessible by bush plane and every trip along the Dalton Highway to Prudhoe Bay on the Arctic Ocean begins in Fairbanks.

Location and Size
Fairbanks is the second largest city in the US state of Alaska after Anchorage and the largest city in upstate Alaska. The Chena River flows right through the city, which joins the Tanana River, which flows south of the city, near the airport in the southwest. The city covers an area of ​​84 km².

Climate
The weather in Fairbanks is characterized by large temperature differences. Summers are usually warm and sunny, winters are bitterly cold with frost. The Fairbanks area has light rainfall throughout the year. The sunny weather during the summer months of June, July and August reaches temperatures of -5°C to 23°C. In late July and early August, temperatures in Fairbanks can soar to a surprisingly high 27°C to 32°C. Temperatures can drop sharply during the night hours, even in summer. One should therefore be prepared for cool evenings. Occasionally it can also snow in valleys in July and August. The longest day in Fairbanks is June 21st. The sun then only sets for 2 hours and the nights are only twilight but not completely dark.

Clothing
The general rule for optimal clothing in Alaska is “onion principle”. That means you wear a first layer directly on your body (avoid cotton if possible), a second warming layer (e.g. a fleece jacket or similar) and a jacket as a third layer that protects against wind and rain. When the temperature changes, you can easily put on or take off a layer.

Riverboat Discovery
Four-hour paddle steamer cruise on the Chena and Tanana Rivers. From May 17th to September 26th, daily departures at 9:00 a.m. and at 2:00 p.m. (Discovery Landing, 175 Discovery Drive, near Fairbanks Int’l Airport)

Gold Dredge 8
A two-hour sightseeing tour through a permafrost tunnel and brings Alaska’s gold rush history to life. The walk through the gold digger camp, where miners explain more about today’s mining methods, is also exciting. After a brief introduction to panning for gold, you can try your luck yourself. Open from May 17th to September 23rd. Tours depart at 10:30am (excluding Saturdays) and 1:45pm (daily) (1803 Old Steese Highway North, Fox)

University of Alaska Museum
A very interesting museum with exhibits on the culture and history of the native peoples as well as the flora and fauna of Alaska. There are also exhibitions about the Northern Lights, the Trans-Alaska Pipeline and various themes. Open daily from 9am to 9pm from May 15th to September 15th, from Monday to Saturday from 9am to 5pm from September 16th to 14th. Free visitor parking is located across the street from the museum. (907 Yukon Drive on the University of Fairbanks campus)

Animal Research Center/Musk Ox Farm
This large research station offers public tours during the summer. You get a glimpse of the lives of the musk oxen, caribou and reindeer that are kept here for educational and research purposes. One hour tours from June 1st to September 30th daily at 10am, 12pm and 2pm. (Yankovich Road, near the university)

Trans-Alaska Pipeline
viewing point with explanation board. This is on the Steese Highway towards Fox, toll free.

Visiting Mary Shields and her sled dogs
At Mary Shields’ home, you’ll hear stories about dogmushing in Alaska and get introduced to the dog team. Mary Shields is known for her books in the US. The evening two-hour tour begins at 7:30 PM. Prior registration required. Mary’s home is about 5 miles north of the University of Fairbanks.

Aurora Ice Museum & The Chena Hot Springs Resort
The Ice Museum is an ice hotel with interesting “ice sculptures”. After the icy experience, one can relax in the warm pools fed by natural hot springs. (At the end of Chena Hot Springs Road, approximately 50 miles/80 km north of Fairbanks). 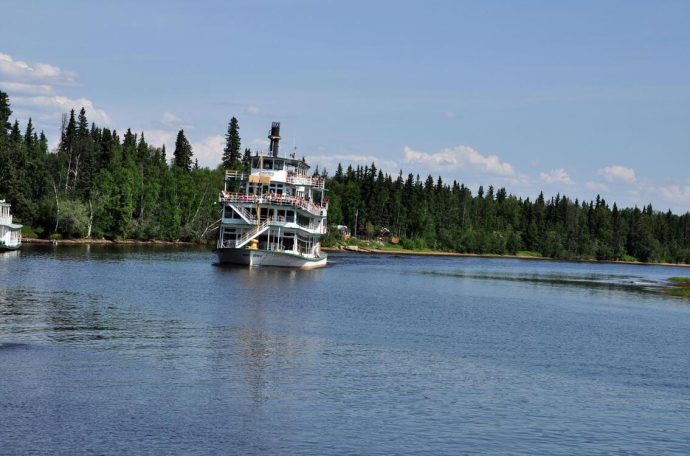